EES Funds Innovative Evangelism.
What would you do with grant from EES? 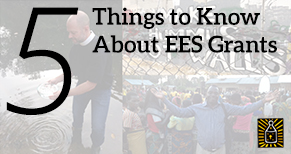 Jesse Zink applied for an Evangelism for the 21st Century grant to visit South Sudan and report for Episcopal News Service on the independence celebrations and the church’s work in Abyei. He visited clergy in three dioceses and was invited to teach and preach. His grant work influenced his book, “Backpacking Through the Anglican Communion.” He believes that a major obstacle to unity in the worldwide body of Christ is failure to adequately understand the context in which our sisters and brothers around the world live and minister.

"From my EES Grant experience, I found my seminary education strongly enriched and informed with new perspectives." EES has been awarding Evangelism for the Twenty-first Century Grants for nearly 2 decades. We are looking for the following in grant applications:

Apply Now or read more in our FAQ.